I would like to talk about Yemen coffee, as I am from Yemen and proud of the agricultural product of my country.  My role in the Food and Agriculture Organization (FAO) of the United Nations is as a Monitoring and Valuation Specialist. I manage coffee value chain projects which makes me excited to write about this topic.

Coffee remains the most famous crop in the world among a few agricultural products, as its name is still mentally associated with Yemen. The Yemeni coffee crop has been one of the most famous agricultural products since ancient times. The quality of this product, despite its low production, differs a lot from the quality of coffee cultivated in many other countries in the world.

Yemen is the only country where the coffee tree grown under climatic and environmental conditions, is not similar to that of other regions of the world. Due to poor agricultural capabilities and shortage of water, Yemenis still use the old cultivation system when it comes to coffee.

Yemeni coffee is known as the best type of coffee in the world, even though the origin of the coffee plant is in Ethiopia. Yemeni farmers invented the use of its balled grains as a coffee drink after roasting, grinding, and boiling in water. Ismaili coffee is the best type of Yemeni coffee, followed by Al-Matari, Al-Haimi, Al-Yafei, and Al-Hamadi coffee, from different regions of Yemen.

The process of harvesting coffee in Yemen is done using traditional methods. Farmers often resort to harvesting the fruit in stages - that is,  in a way maintaining its quality and competition - whenever the color of the fruit turns a bright red color towards maturity, the farmer reaps it, or when its color becomes purple or dark grey. The coffee farmer collects the fruits that are harvested at a particular time and separates them from those that are harvested later to ensure better quality and flavor of the fruit. Furthermore, the farmer isolates the fallen fruit, in order not to affect the quality of the coffee as this type of fruit is usually saturated with moisture.

Yemen's coffee production is currently estimated at 20 thousand tonnes annually, and most of it is for local consumption. Yemen ranks 46th in the world in coffee production among 64 countries and the sixth in Asia. One kilo of coffee is sold at $15, according to the agricultural statistics in Yemen. 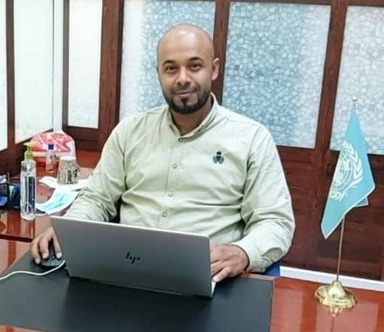